lululemon athletica inc., an athletic apparel company, together with its subsidiaries, designs, distributes, and retails athletic apparel and accessories for women, men, and female youth. It operates through two segments, Company-Operated Stores and Direct to Consumer.

Take a look at the 1-year chart of Lululemon (NASDAQ: LULU) below with my added notations: 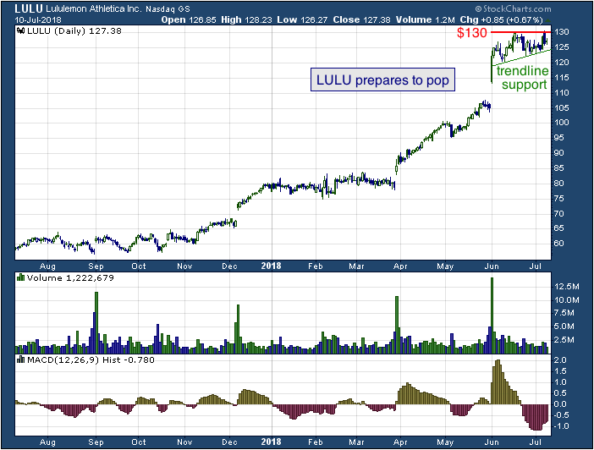 Over the past month, LULU has run up against a $130 resistance (red) on two separate occasions. In addition, the stock has been climbing a trend line of support (green) since the beginning of June. Together, these two lines have formed an ascending triangle on LULU. Eventually, the stock will have to break either the $130 resistance or the triangle support.

The Tale of the Tape: LULU is winding up between two key levels. A long trade could be made at the trendline support or on a break above $130. A break below the trendline would be an opportunity to enter a short trade.