Dave & Buster’s Entertainment, Inc. owns and operates entertainment and dining venues for adults and families. Its venues offer a menu of entrees and appetizers, as well as a selection of non-alcoholic and alcoholic beverages; and an assortment of entertainment attractions centered on playing games and watching live sports, and other televised events.

Take a look at the 1-year chart of Buster’s (NASDAQ: PLAY) below with the added notations: 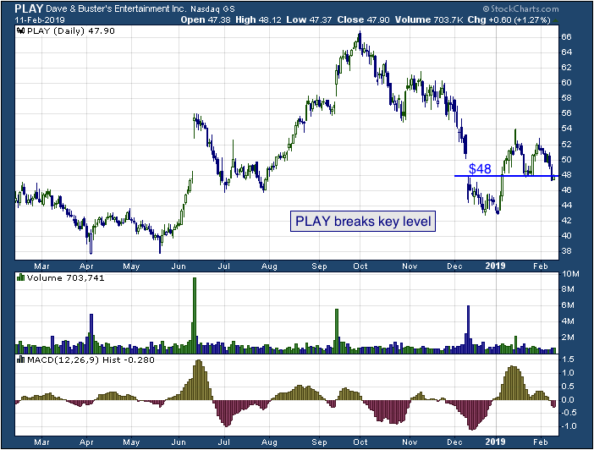 Over the course of the past 2-3 months, PLAY has formed an important level to watch at $48 (blue). The mark was support in mid-January, resistance back in December, and now it is acting as a resistance on a rally back up to it.

The Tale of the Tape: PLAY has a key level at $48. A trader could enter a long position on a break back above that level with a stop placed under it. However, if traders are bearish on the stock, a short trade could be made instead on a rally up to $48.