The Walt Disney Company, together with its subsidiaries, operates as an entertainment company worldwide. The company’s Media Networks segment operates cable-programming businesses under the ESPN, Disney, and other brands. Its Parks and Resorts segment owns and operates the Walt Disney World Resort in Florida and the Disneyland Resort in California. The company’s Studio Entertainment segment produces and acquires live-action and animated motion pictures for distribution in the theatrical, home entertainment, and television markets primarily under the Walt Disney Pictures, Pixar, Marvel, Lucasfilm, and Touchstone banners.

Take a look at the 1-year chart of Disney (NYSE: DIS) with the added notations: 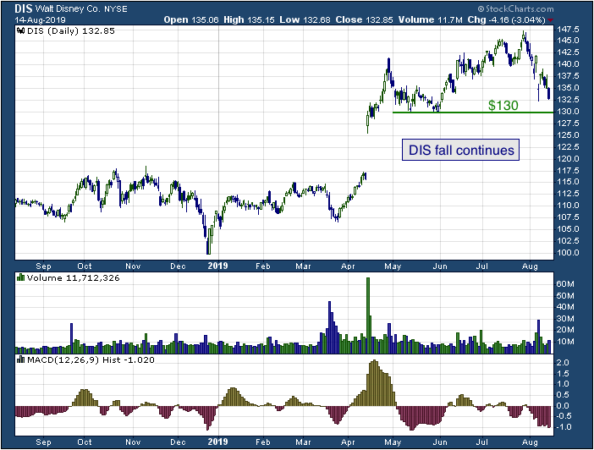 DIS has formed a key level of support at $130 (green) during the past 3 months.  If the stock comes back down to that level again, traders could be able to expect some sort of a bounce. However, if the $130 support level were to break, lower prices should follow for DIS.

The Tale of the Tape: DIS has key support at $130. A trader could enter a long position at or around $130 with a stop placed under the level. If the stock were to break below the support, a short position could be entered instead.