Aaron’s (AAN) is a retailer of furniture and consumer electronics. The company retails televisions, computers, tablets, mobile phones, furniture, mattresses, washers, dryers, and refrigerators. The company has been performing well during the pandemic.

Earlier this month the company…

provided a preview of its third quarter earnings report, which it is releasing on October 29th. Management revealed solid performances across all products and categories as well as a strong customer base and robust lease portfolio. The company also raised its earnings and sales guidance for the third quarter.

In July the company announced it would separate into two public companies, Progressive Leasing and Aaron’s Business. This should please investors as it will allow it to sharpen focus and deliver long-term shareholder value.

AAN has a solid balance sheet with a current ratio of 6.9, a debt to equity ratio of 0.4 and $313 billion in cash on its books at the end of the second quarter. The company has had solid and stable revenue growth. Sales are expected to grow 7.9% next year.

From a valuation standpoint, the company is fairly valued with a price to sales ratio of 1.0 and an EV/EBITDA ratio of 2.2. The stock’s recent momentum has been trending downward, but it is up 4.1% for the month. This has led to a grade of “B” for Trade Grade our POWR Ratings system, which leads us into the stock’s technical chart.

Take a look at the 1-year chart of AAN below with the added notations: 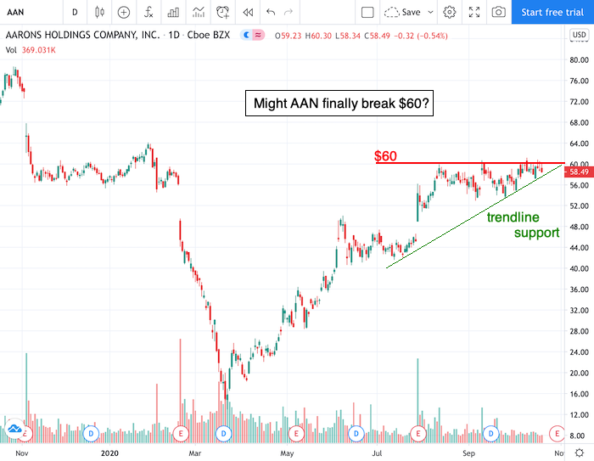 Chart of AAN provided by TradingView

While climbing a trendline of support (green), AAN has also formed a strong level of resistance at $60 (red). The stock seems to be pulling back from that resistance yet again, which could lead to another test of the trendline. That line currently sits around $58.

AAN has a key resistance of $60 and a rising trendline of support. A long trade could be entered at the trendline, or on a break above $60, with a stop placed under the point of entry. However, if the trendline were to fail as support, lower prices could follow instead.